skip to main | skip to sidebar

I'm back from Bristol but again only for the weekend, I now have to face the prospect of practical and written tests at the end of the week which I'm not looking forward to at all. So once again it's pictures from the library being posted. These three show the same moment from one of our early battles in a sort of disconnected montage. The scenario was one in which the French were given the task of stopping the two allied advance forces linking up and holding a strategic road junction. There were 3 French divisions of 8 to 9 battalions and a foot battery each, plus a small cavalry division of 2 regiments of dragoons and 2 of light cavalry. Opposing them were two Russian divisions, again of 8 or 9 battalions with artillery and a Prussian division of 10 battalions. Cavalry for the Russians was 2 heavy regiments plus an uhlan and a hussar regiment and for the Prussians a light cavalry regiment. Each side also had a horse battery.

The first picture shows the French right where the attack is going well and the Prussians are in disarray. Things had started well for the Prussians, deploying onto the table they had been caught out by the French lights but a spirited charge from their own cavalry saved them from being cut down. However their deployment area became more and more restricted and the superior French infantry finally drove them off with heavy casualties.
Picture number two is of the centre and shows another French attack, this time against the Russians. The French appeared to have the advantage as they were able to concentrate more troops at the point of attack, but the nature of the terrain made it difficult for them to make those numbers count and the melee's which ensued ended in a stalemate. It was here that the French also decided to deploy the majority of their cavalry but it was destined to spend most of it's time sitting at the back of the table waiting for an opportunity that never came.

Last but not least the French left. It was here that the battle was decided. The Poles were given the task of stopping any allied reinforcements from reaching the centre but had to cross a large stretch of open ground with little cavalry support in order to do so. Inevitably the Russian cavalry was able to force them into square whilst the Russian infantry raced on almost unmolested towards the strategically vital crossroads. Their arrival made the task of the French attack on the centre impossible.
The game was played out over three (maybe four) evenings and in the main went well, remaining balanced until the last few moves. It also gave me as the game designer a better idea of what works and more importantly what doesn't.
Posted by Noel at 13:25 1 comment: 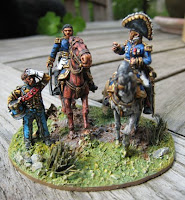 OK so here is a short introduction, God knows why because the only people reading this no full well who I am... any way I'm Julian Waters.
I enjoy painting figures and find it relaxing after a day looking at a PC screen. I’m not a professional painter and don’t profess to be, I just thought it would be good to chat about painting and to pass on a few tips and possible receive some. As Noel has pointed out several times I’m not the most prolific painter [or blogger] but I am passionate about painting and hope the end results are good. The images throughout this post are of figures I have painted for friends...

I was recently at the War games Holiday Centre with the guys and I saw some figures painted by Neil Sheardown and thought they were great. But one of the things I just can’t get my head around is how fast he can churn out these high quality figures. I’m a steady 1 Battalion a year man whilst Neal seems to be able to paint 400 a month, ok maybe not 400 but LOTS! 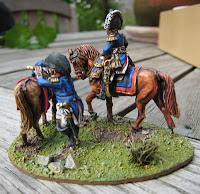 So I decided to look at the way I paint to see if there were any things I could change that would allow me to paint a little faster and yet still keep the enjoyment factor [as primarily that why I do it] and the quality.
So the next few posts from me will be about this, I hope you enjoy them.
Posted by Truegrit at 21:39 2 comments:

I'm back from Bristol for the weekend, and as there is no wargaming going on in the garage at the moment I've decided to post a few random pics of some of it's inmates. This first one is a couple of units that I was lucky enough to win on ebay a little while ago. To be honest the photograph doesn't do them justice. The reserve battalion was painted by Chris Leason and the Jaeger it's believed were painted by David Imrie. They arrived along with a regular battalion and some very nice Landwehr Uhlans which I'll try to feature at a later date.

Next in line is a French command stand painted by Julian Waites using Perry figures. Supported by some of Justin Daveys' French infantry which are all Elite Miniatures. Julian used a white undercoat and built up the shading using inks to achieve this effect, though he's recently been experimenting using a black undercoat and might one day even let us in on how it's done by writing his long awaited painting guide. Only time will tell.

Lastly some of my own work, a French foot battery once again using Elite figures. As you can see I haven't got the colour of the gun carriages right, so if you have any advice or tips on which ones are the best to use I'd appreciate it. I think they should be a more olive green colour.
I'm off to Bristol again tomorrow evening to have my head filled with all sorts of nonsense, but I'll try to get another post in next weekend.
Posted by Noel at 16:06 9 comments:

The Leipzig game came to an early if not altogether unexpected end on Thursday night, and in truth I have to say that I was quite pleased that it did. As a game it was fine, Eric our resident viking had put a fair amount of effort into producing a balanced and challenging scenario and the game flowed well with surprises for both sides. However having played exclusively with 28mm figures for the past two years I found the 15mm stuff fiddly and a bit uninspiring. This is not to say that I look down my nose at 15mm figures, I've had some great games using them and they allow you to field very large numbers at a reasonable price. I can't however escape from the fact that I would rather play a game with 20 battalions a side in 28mm than one with 50 battalions a side in 15mm. I suppose it's mostly down to aesthetics as I'm a sucker for nicely painted Napoleonic units, but there's also the fact that the odd millimetre or two isn't usually such a big deal when you're dealing with musket ranges of 16 inches.

So why did it all end prematurely? Well as previously mentioned this game had been planned as the last one for our 15mm collection before consigning it to ebay and using the money gained to buy more 28mm stuff. Unfortunately due to holidays at the WHC and some unforseen occurences it got delayed by several weeks. We then had some interest from an old wargaming friend of ours who wanted to buy a large portion of the figures at a reasonable price. We therefore halted the game and got the figures laid out for him to be able to make us an offer. I was surprised at the number of figures, 54 battalions of Russians, 40 or more Austrians and we haven't totalled up the French, British, Spanish and Prussians yet. On top of that goes the cavalry, artillery and skirmishers making a tidy number.
I've added a couple of pictures from the game, the top one shows the position on the allied left flank after the Austrians led by Neil (rules lawyer) Braddon ousted the Poles from their defensive position. The position was stabilised for the French later by the defeat of the Russian Corp supporting the Austrian right. The second picture shows Dom's Prussians advancing on to the back table on the Allied right. To the left Andy practises his technique for loitering in wardrobes while Justin (centre) demonstrates his ability to simultaneously insert a finger up each nostril.

Well that's all for this post, I'm off to Bristol for the next three weeks on a training course, returning only at weekends so blogging will be sporadic. That said I'm hoping to have a painting guide by Julian Watts to publish sometime during the present decade. So keep an eye open for that.
Posted by Noel at 10:27 6 comments:

It's been rather quiet of late on the blogging front, so never one to miss an opportunity I thought I'd post some pictures which concentrate on one particular painter. Here's a lovely French battalion by Neil Sheardown, I'm constantly surprised at how Neil manages to maintain such a high Standard of painting and still be as prolific as he is. Neil has made the largest contribution by far to garages' ever growing stock of soldiers and is currently painting four Westfalian battalions and a Regiment of Russian Cuirassier.

Which rather neatly leads me on to the next picture, not mine sadly but a unit painted by Neil for the WHC.
I also took delivery of two battalions of Prussians, a Westfalian battalion and a six gun Russian foot battery from Neil in September and we're now trying to decide what the next project should be. Bavarians? Neapolitans? Saxons? Answers on a postcard or feel free to add a comment on the blog.
Posted by Noel at 16:00 7 comments:

Picture of the Week

The newest addition to our household, our French Bulldog who we have named Davout